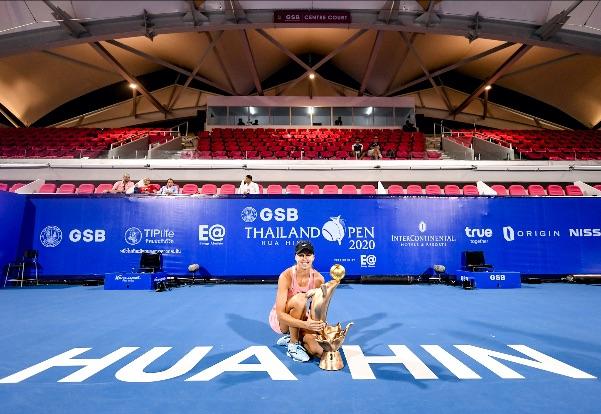 Poland’s Magda Linette proved too strong for Swiss teenager Leonie Kung in the final of the GSB Thailand Open 2020 presented by E@, taking the title with a 63 62 win.

Linette, who celebrated her 28th birthday this week in Hua Hin was competing in her fourth WTA final, having won her first WTA title last summer at the Bronx Open prior to the US Open.

Linette lost just one set in her run to the title this week, rallying from a set down to beat another teenager, Xiyu Wang in the quarterfinals.  Following her semifinal showing in Hua Hin in 2019 she confirmed that the Thai resort is fast becoming one of her favourite places:

“Maybe it’s the surface that fits me well and the balls also match my game, I have time to hit the ball here.  I think also it was really tough conditions so it was a little bit less about tennis it was more about mental and finding the way and all my life I had to be finding the way so I’m pretty good at it.”

“I’m feeling wonderful, really coming here I didn’t expect this at all, I was even wondering how it’s going to be because I was coming from Fed Cup indoors and I didn’t have much time to adjust, so I really wasn’t expecting it and I’m so happy that I managed to start really well and continue throughout the matches to keep my level as high as it was at the beginning.”

For the Swiss qualifier Kung the final proved a match too far after coming through qualifying to reach her first WTA final.

The 19 year-old commented following her semifinal that she would use all her remaining energy in the final but it was not enough to hold off her Polish opponent.  Despite the loss Kung was still happy with her week in Hua Hin:

“Of course when you lose you’re a little bit disappointed but I can’t complain about anything this week, I played the best tournament of my life and I learnt so much the whole week and I played against so many great players and Magda just played a lot better than me today and she deserved to win.  I’m just happy I had the chance to play the finals.”

“It’s my first time in Thailand and I’ve enjoyed it so much, it’s an incredible country, great food and the people are amazing here.”

Making it to the final also changed the teenager’s plans for the year and opened up some exciting possibilities:

The all Australian pair were contesting their first final as a team, after reaching the semifinals last year in Taipei whilst Haas and Perez were making their tournament debut together.

All four of the women taking part in the doubles final had enjoyed their time in Hua Hin taking part in a number of activities including caviar tasting, screen printing, an elephant sanctuary and squid fishing.  Following the final Storm Sanders commented:

“It’s been a really fun week here in Hua Hin, it’s been really fun playing with Arina this week, we’ve played a few tournaments together and it’s nice to get out again.  Conditions have been a little bit tricky with the wind and it’s been hot, but it’s been a pleasure to play here.”

Arina Rodionova joked when asked if the pair would return to defend their title:

“We’re already thinking about how we can do it, we’re booking the tickets for next year. We’ve felt really welcome here and the tournament is so nicely organised and they took us to such interesting spots.  Thailand is such a welcoming country so we would definitely like to come back.”