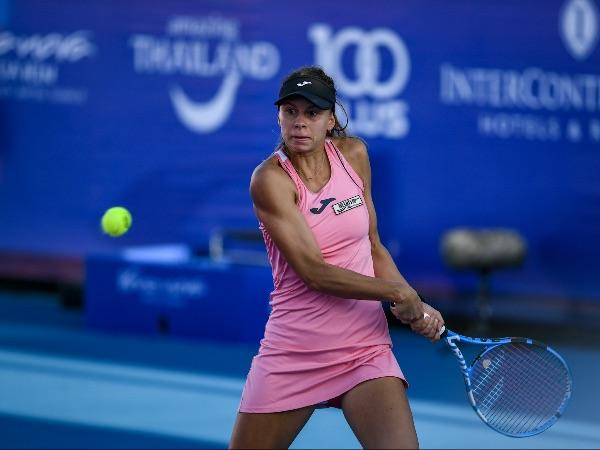 Poland’s Magda Linette will face Swiss teenage qualifier Leonie Kung in the final of the GSB Thailand Open presented by E@ on Sunday in Hua Hin.  Linette scored a straight sets win over Romania’s Patricia Maria Tig 75 64 to book her final place whilst Kung outlasted No.8 seed Nao Hibino in a three-set thriller 75 46 63.

Linette, who reached the semifinal stage in Hua Hin in 2019 progresses one step further in 2020 to reach her fourth WTA final.  The Pole found her groove late in the first set after a hesitant start:

“At the beginning I was a little bit too slow, and gave her too much space to move me around and dictate the tempo.  I was 3-1 up but I made a couple of easy mistakes, when you’re 3-1 you just need to take charge and I didn’t do that.  But my coach came and told me I’m playing too slow and you need to hit harder, she’s dictating too much and at the end I played some great game.”

With her confidence high Linette broke at 3-2 in the second set to lead 4-2 and then consolidated the lead to go up 5-2.  Tig stemmed the tide by holding serve at 5-3 and then went for broke when Linette served for the match, the Romanian hitting a series of forehand winners to hold off defeat.  However, the reprieve was only temporary as Linette broke again to take the match 75 64 and said following the match:

In the final Linette, the No.5 seed, will face an unknown opponent, 19 year-old Kung who came into the tournament ranked No.284 in the world and had never played a WTA main draw match before.

The Swiss youngster is not a complete unknown having reached the final of junior Wimbledon in 2018, losing out to Iga Swiatek, however she had never performed at WTA main draw level before.   Since arriving in Hua Hin she has won two qualifying matches and also beaten the No.7 seed Lin Zhu, the No.3 seed Qiang Wang and now the No.8 seed Hibino en route to the final. When asked if she would have believed it is someone had told her at the beginning of the week that she would make the final Kung said:

“I would have said you’re crazy, or you’re most probably wrong because this is like a dream come true.  I would have never thought that I would come here, make it through qualies and then make it to finals of my first WTA, it’s just an unbelievable run and I’m just so happy.”

Despite feeling the effects physically and mentally of winning seven straight matches in a week the teenager is prepared for one last push in the final:

“Tomorrow I will just try to put all of my energy that is left inside of me on the court and just enjoy it.”

Australia’s Ellen Perez and Austria’s Barbara Haas will face the all-Australian pairing of Arina Rodionova and Storm Sanders in the doubles final after the Austrian/Australian pairing defeated China’s Shuai Peng and Yafan Wang in the doubles semifinal 64 62.  This is the first time that Perez and Haas have paired up and the partnership are having fun as well as success on court:

“This whole week’s been really fun”, said Perez, “and we’ve played some great doubles so it’s nice to get the results and be in the final.”DOWNLOAD LINK – Images and video footage of Press Conferences with winners – Credit: GSB Thailand Open presented by E@