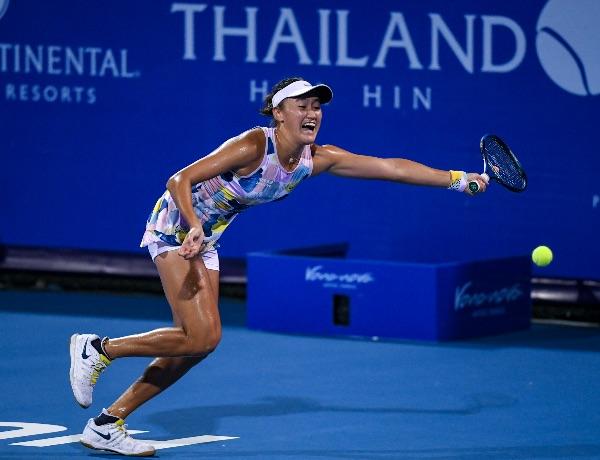 China’s Xiyu Wang created the upset of day two defeating the No.2 seed Petra Martic at the GSB Thailand Open presented by E@.

The eighteen-year-old had never defeated a top 50 player before today but went a step better, scoring her first top 20 win defeating Martic who is currently ranked No.15 in the WTA rankings.  Following the match the youngster who won the junior US Open title in 2018 commented:

“She’s a very good player and before the match I just think I do my best and do all I can and so I play every point and if she plays good, then well done.  But I feel good, I don’t have any pressure because she is a very good player.”

“This match gave me a lot of confidence and I think if I can keep doing things like I did today and focus my work I can keep winning.”

The defeat of Martic wasn’t the only upset on Tuesday in Hua Hin, the No.6 seed Yafan Wang also fell in the first round to Romania’s Patricia Maria Tig 61 16 76(5).  In a close-fought third set Tig came out just on top and following the match said:

“I expected a tough match, I prepared for it and I’m really happy that I could get the win and fight like I did.  I was trying to move better, to activate myself because I was a little bit behind in the second set and I just told myself to fight for every point because the third set is the last chance to get the win so that’s what I did and it went great.”

Also making it through to the second round after a three-setter is Austria’s Barbara Haas who defeated Chihiro Muramatsu 36 75 63 and commented:

“First round is always difficult in any tournament.  I had a very tricky opponent and I found my game at the end of the first set and the beginning of the second set.  I just worked to my game plan and luckily I got through this tough match.”

Third seed Qiang Wang had no such problems in her first round encounter with compatriot Xinyun Han, despite having lost to her in their last three meetings.  Today the World No.27 secured a straightforward 61 61 win and joining her in the second round with straight sets wins were fellow Chinese players Shuai Peng who saw off Yue Yuan 61 60 and No.7 seed Lin Zhu who overcame Russia’s Varvara Flink 64 62.

Poland’s Katazyna Kawa also progressed through the first round with a win over India’s Ankita Raina 36 60 61 and qualifier En-Shuo Liang won her third match in as many days for the loss of only three games to Xinyu Wang 63 60.