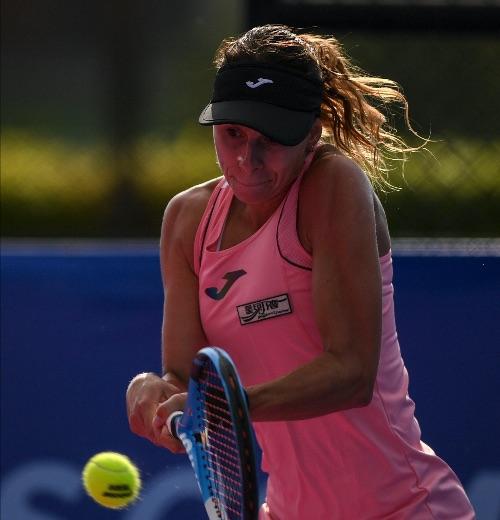 Birthday girl Magda Linette had reason to celebrate on day three at the GSB Thailand Open presented by E@ when she won her first round match in Hua Hin.  Joining her in the second round was top seed Elina Svitolina who made her debut at the event.

Linette from Poland, who was celebrating her 28th birthday, had not previously enjoyed playing on her birthday but appeared to break the curse in Hua Hin with a 62 62 win over Kateryna Bondarenko:

“I never had a good experience of playing on my birthday almost every time I lost the match so I’m really happy this time that I managed to go out there and play a good match because I really had a bad experience before I don’t know why.”

Not even the windy conditions could put a dampner on the Pole’s day:

“It was really tough and especially for me because I’ve just come from Europe where I played indoor in the Fed Cup so it was a little bit tricky.  I was actually glad for a little bit of breeze but it was quite tough serving and in general playing, but I’m happy that I managed and that I played a solid match.”

Top seed Elina Svitolina is bidding for her first title since the 2018 WTA Finals and made short work of the Netherlands Bibiane Schoofs 62 64 in their first meeting on the WTA Tour:

It will be another first-time meeting for the Ukrainian when she plays Australia’s Storm Sanders in the second round:

“I know she’s a left hander so I have to be ready for a different spin and for me it’s important to just stay focused on what I have to do on the court and try to move quick and be ready for anything that comes my way.”

“It feels amazing, I was really enjoying my time on court and it’s the biggest win of my career so I’m really happy about it today.”

She will now take on World No.27 Wang Qiang who won her second round match against Kawa Katarzyna 63 64 but the Swiss 19 year-old is relishing each new challenge:

Joining Kung and Wang in the quarterfinals are No.8 seed Nao Hibino who ended the run of Thailand’s lucky loser Peangtarn Plipuech 60 61 and No.4 seed Zheng Saisai who saw off the challenge of Liang En-Shuo, former junior World No.2 and 2018 Australian Open champion 64 63.DOWNLOAD LINK for rights-free images: Credit – GSB Thailand Open presented by E@